One of my favorite parts of my day job as Producer of Philosophy Talk is putting together the billboards, aka open tease, that comprise the first minute of the broadcast (before the news). It's basically a condensed clip show, with a small set of voices (hosts, guest, movie/TV clips, song lyrics) combining to form an aural entity far greater than the sum of its parts. Coming up with that set for each show -- recording the hosts reading wild lines, scouring the interweb for clips to "answer" them, finding a song with just that right balance of usable lyrics and instrumentalizable passages -- can be a struggle, but the result is usually a pleasure.

I've finally started compiling all the ones I've produced (i.e. all but a tiny handful) in one place. As of this writing, it's everything that aired in 2014. But the complete will stretch back to 2007. Enjoy!

Posted by Devon Strolovitch at 3:38 PM No comments:


The Ramones, Merry Christmas (I Don't Want to Fight Tonight)

Posted by Devon Strolovitch at 7:44 AM No comments:

Posted by Devon Strolovitch at 8:41 AM No comments:

Posted by Devon Strolovitch at 7:49 AM No comments:

A radio feature I produced about a 1974 salsa record by Celia Cruz and Johnny Pacheco airs nationally this weekend on PRI's Studio360:

It's the latest installment in our Peabody Award-winning series Inside the National Recording Registry. I'd had my mind set on doing this one since the get-go, based mostly on fondness for a CD of Celia's 1950s Cuban recordings that a friend used to play in his Park Slope apartment when I'd visit in the late 90s. I didn't actually know much about about Celia & Johnny, though I did narrate a pilot we produced about salsa music for a project called American Sabor. Our pieces didn't make the final exhibit, but one of the project's curators wound up as one of the voices in this story. (And for the small-world files: her partner, one of the other curators, co-founded the steel drum band I played in at Oberlin College.) 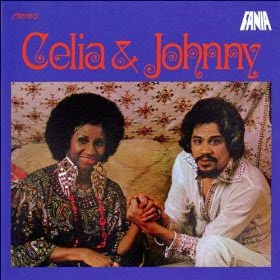 I myself did one of the interviews for the story, and it was easily the most challenging interview of my life. We managed to get in touch with Johnny Pacheco via his wife Cuqui, and so were thrilled to have one of the principals willing and available to talk about the record. He is, however, very old. Though he at first "got" the idea of repeating the question in the answer for our non-narrated purposes, he had a LOT of trouble keeping on topic. Lots of starting and stopping, trailing off. (Do I ask... now?) A not-great phone line didn't help either.

Later, when I got the studio tape, I could hear Cuqui prompting Johnny by whispering to him. God bless her, she was basically helping me each time she interrupted him with a little nagging admonishment. I may have cringed, but it saved the day, and Johnny was clearly touched to be talking about Celia. At the end of the interview he said to call him if I needed anything. I haven't yet, but in the meantime here's some more info about Celia & Johnny from Studio360's website:


In 1974, Latin music in the US was about to get a kick in the pants. The audience for the big bands was (as we say today) graying; younger, US-born Latinos thought of the classic Cuban forms — the mambos and sones and guarachas and guaguancós — as their parents’ and grandparents’ music. But Johnny Pacheco, a bandleader and star percussionist, had formed a new record label with a new approach. Fania Records, based in New York, put those forms together with influences from Puerto Rico, Colombia and other countries, and called it salsa.

“There was always this debate between [bandleader] Tito Puente and Johnny,” says Ana Cristina Reymundo, a biographer of singer Celia Cruz. “Tito would say, ‘Johnny, pero que la salsa, se come, no se toca — We eat salsa, we don’t dance it, and we don’t play it.’ And then Johnny would laugh and say, ‘But Tito, the kids don’t know that.’ It was a truly brilliant marketing strategy to repackage to these beloved rhythms.”

Pacheco wasn’t the first to use the term salsa to describe music, but Fania Records made it nationally popular, and Celia & Johnny was its first breakout hit. It set Cruz, a singularly talented and popular singer who had worked with Puente, in front of a much smaller band that left a lot of room for vocal improvisation.

“When I was rehearsing the band,” Pacheco remembers, “I saw that we had Dominicans, Cubans, Puerto Ricans, and two Jewish fellows. When you make a sauce, you have different ingredients. And when I saw the band and the singer I thought, this is what we got. We got salsa.”

Posted by Devon Strolovitch at 9:13 PM No comments:

Posted by Devon Strolovitch at 8:18 AM No comments: