Inside the National Recording Registry: The Wild Tchoupitoulas

A radio feature I produced about the 1976 album The Wild Tchoupitoulas airs nationally this weekend on PRI's Studio 360:


This is the first episode in the series we've been producing for Studio 360 for five years now (and three years for NPR's Weekend All Things Considered before that). It's also the first one to air since we won a Peabody Award earlier this year. No pressure, right? Well, as it turns out, they do treat you nicer the next time. Our editor at Studio 360 only asked for a single change (one I'd anticipated, though I did tweak a few more things before sending the final mix) – which was a good thing, because I've now got to get cracking on my next contribution to this year's series, the "difficult listening" of Ornette Coleman's 1959 album The Shape of Jazz To Come. Anyway, for now here's more info on the Wild Tchoupitoulas from Studio 360's website: 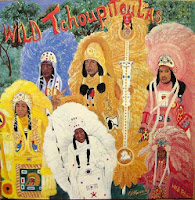 If you've spent time in New Orleans – or watched the HBO show Tremé — you may know about one of the most idiosyncratic customs of that highly idiosyncratic town. The Mardi Gras Indians are African-American social clubs that take on the names of fictitious Indian tribes. They each have their own special expressions, rituals, and costumes: “lots of brightly colored feathers, sequins, and beaded suits,” describes Offbeat Magazine’s Jan Ramsey. It’s a tradition that dates back into the 19th century.

In 1976, a record came out that brought the music of the Mardi Gras Indians to a wider audience. The Wild Tchoupitoulas featured all four Neville Brothers and the Meters, an all-star New Orleans backing band. The album was chosen for the Library of Congress' National Recording Registry this year.

The Wild Tchoupitoulas were, for a time, led by George Landry, known as Chief Jolly — an uncle to the Neville brothers — and the album was made as a tribute. “He was, as far as I’m concerned, a giant,” remembers Cyril Neville, “and one of the people who put New Orleans culture on the map.”

Posted by Devon Strolovitch at 5:57 PM