A radio feature I produced about the 1967 album Forever Changes by the L.A. group Love airs nationally this weekend on PRI's Studio 360:


I began this project with what felt like less skin in the game than last year's feature on Captain Beefheart's Trout Mask Replica (Tom Waits interview, anyone?), though in both cases I was only peripherally familiar with most of the music at the outset. The production journey was significantly shorter than last year, but at the end of the day similarly enlivening. Here's more information from Studio 360's website: 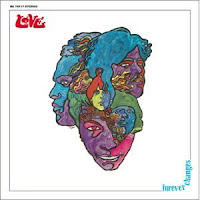 The year 1967 saw the release of two psychedelic pop masterpieces — one globally famous (the Beatles' Sgt. Pepper), the other nearly forgotten: Forever Changes, by Love. Sometimes referred to as Arthur Lee’s Love, it was one of the first mixed-race bands — “still to this day, you don’t see many bands like that,” notes Maria McKee, the younger sister of Love member Bryan McLean. “If we had been an all-black group,” recalls guitarist Johnny Echols, “we would have been typecast as a blues group or an R&B group, and we didn’t want that.”

Like Sgt. Pepper, Forever Changes was an eclectic record that mixed different '60s elements with symphonic ambitions, including fully orchestrated horn and string sections. McLean and Arthur Lee — both dead now — wrote and sang lead, McLean bringing the folk-rock influence he had acquired as a road manager for The Byrds. But Forever Changes made little impression at the time. Its undercurrent of darkness and paranoia may not have suited the Summer of Love, and it was certainly overshadowed by the Beatles’ great watershed.

But it was in Britain that Forever Changes found its audience, as Maria McKee saw firsthand many years later. “When I was in my band [1980s country rock group] Lone Justice and we performed the first time in London, that was pretty much all anybody wanted to talk about — Love.”  As a new generation of American musicians and fans of ‘freak folk’ has rediscovered the lesser-known 1960s, Forever Changes’ reputation continues to rise.

The record was selected for the National Recording Registry in 2012. Telling its story are Johnny Echols, Maria McKee, and the record’s producer, Bruce Botnick.

Posted by Devon Strolovitch at 4:44 PM