First Time I Met The Blues 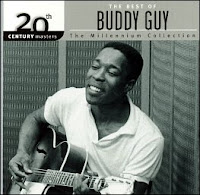 Buddy Guy will receive a Lifetime Achievement Award at this Thursday's Blues Music Awards in Memphis. For the occasion, this week's second hour will feature a special we produced a few years ago when Buddy turned 70 (hosted by Dan Aykroyd... as Dan Aykroyd), "First Time I Met The Blues: The Buddy Guy Story." I was fortunate to interview Mr. Guy on his 72nd birthday when he came through the Bay Area on tour with George Thorogood. It was the day after the show, and my first question was actually a confession, admitting I'd only arrived halfway through Buddy's set because I had assumed that George Thorogood and his Bad To The Bone Rock Party would be opening for the blues legend. Alas, plenty of blues legends have toured as opening acts for classic rock artists over the years, but such is my inexperience with the classic rock concert (a point of pride?). In fact we played a tune last week from Albert King's first night as a headliner at the Fillmore (released as Wednesday Night in San Francisco -- how apt...), after opening for Jimi Hendrix and John Mayall and the Bluesbreakers. These days younger blues musicians do often open for the established veterans, from Chris Cotton and Honeyboy Edwards at Biscuits and Blues a couple years back to Tommy Castro on tour with B.B. King a few years before that (of course, it was B.B. opening for the Rolling Stones back in the day). I guess I just hadn't thought of George Thorogood as quite so veteran or established...

Posted by Devon Strolovitch at 10:52 AM